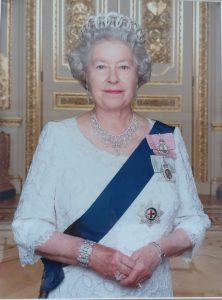 On behalf of the citizens of Godmanchester, the Town Council conveys its deepest sympathy to all members of the Royal Family, over their tragic loss.

A Book of Condolence can be found in St Marys’s Church, Chadley Lane, Godmanchester.  The Church is open rom 9.30am to 5.00pm.

Should you wish to lay flowers as a tribute to Her Late Majesty, Queen Elizabeth the Second, you may do so around the Godmanchester War Memorial on Post Street.

At the end of the mourning period there will be a ceremonial removal of the flowers, which will be taken to the Community Nursey to be composted. For this reason, we would ask that you remove any form of wrapping before laying them. They will then be used to feed the oak tree which we will be planting in memory of Her Majesty.