Last month we posted the message below to advise residents that the children’s wooden climbing equipment, know as Logworld would be removed.  This proved to be an emotive subject with many people taking to social media to express their feelings.  The removal work was put on hold until Council were able to discuss the matter further.   The installation of Skyworld was partly on the provisio that Logworld would be removed in September 2022.  Therefore, as already agreed, the removal of Logworld will take place and will be during the week commencing 21 November 2022.

Logworld has been a much-used wooden play facility located on the Recreation Ground near the Chinese Bridge, Godmanchester.  The multi play equipment, designed for children aged 5 years and older, has survived repeated flooding due to its proximity to the Great River Ouse.

The equipment has been inspected regularly by ROSPA and weekly by the Town Council’s Wardens.  Logworld has always been maintained as recommended.

A few years ago, it was noted that Logworld was nearing its useful life and a replacement would be needed soon.  In 2018, the Town Council started to set aside reserves for when the equipment became past repair and required replacing.

The Council decided this was an opportunity to source a new piece of equipment which would really appeal to local children.

In May 2022, the Town Council were delighted to reveal ‘Skyworld’, a multi feature climbing installation designed and coloured to blend into its surroundings, capable of holding 100 children and not damaged by flood water.  Like Logworld, Skyworld is also suitable for children over 5 years old. 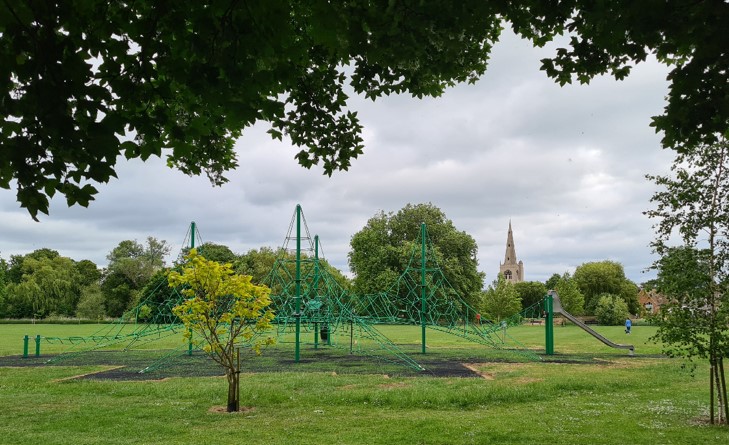 The project was designed to be positioned on the Recreation Ground to accommodate the Summer Gala Day stalls and picnic gazebos, not forgetting when the children want a day out to burn some energy.

Logworld has more than served its purpose so will be removed within the coming week or two.  The ground will be levelled and grassed over.  It may appear as if it never existed but there will be many residents, both young and slightly older, who will have fond memories of their adventures on Logworld.