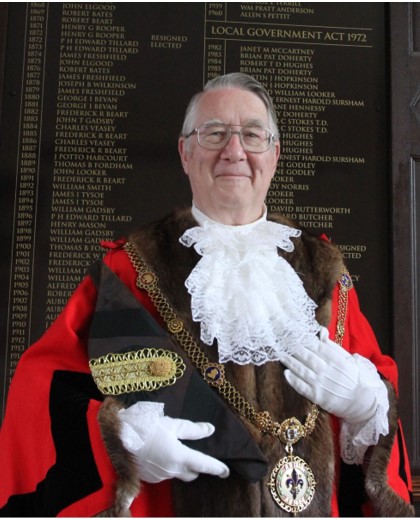 Cllr Richard “Dick” Taplin was installed as Godmanchester’s new Town Mayor on Thursday 19 May 2022, and will be supported by Cllr Colin Hyams in his second term as Deputy Mayor.

Cllr Taplin spent 30 years in the Royal Air Force as a Logistics Officer, followed by 14 years as the Junior Bursar at Downing College, Cambridge, when he was also a Proctor for Cambridge University. His wife, Nan, will be joining Cllr Taplin as the Mayoress. Nan and Dick have lived in Godmanchester for nearly 30 years, and have four married sons and 10 grandchildren.

Cllr Taplin stated: “I am deeply concerned by the current financial climate, particularly for those on limited means. The rising cost of food and energy, exacerbated by the war in the Ukraine, will mean that families will have less money to support themselves, and thus my selected charity for this year is the Godmanchester Foodbank, which does such excellent work in helping families throughout Huntingdonshire.”

He went on to say: “Godmanchester has a very dynamic community life, with many voluntary organisations helping to support the town. This was most amply demonstrated during the Covid pandemic when so many individuals stepped up to help their neighbours while keeping them safe. Thus I hope that the civic events we put on this year will attract a solid following and contribute to my charity appeal.”

“Over the past year, my predecessor has overseen numerous improvements in the facilities provided, especially for young people, with a new multi-wheel funtrack at Judith’s Field, the Skyworld climbing frame on the Recreation Ground, and additional play equipment for toddlers – again at Judith’s Field. This will continue, and we are looking to enhance similar facilities on Queen’s Walk, as well as renovate our historic Town Hall to name but two initiatives. One major focus will be to improve road safety, and the recent holistic survey undertaken by Atkins will serve to address these problems, covering pedestrian areas, parking provision and cycling security as well as reducing the impact of traffic flow.”

“Our town continues to grow, with many new families coming to live in Romans Edge and nearby developments, and we need to welcome and integrate these newcomers to our town. At the same time, we seek to improve our environmental footprint, and thus wish to encourage the growth and addition of local businesses such that our citizens can walk to work through our lovely town. In all these initiatives, I am most fortunate to be supported by a great Council and a first-rate civic team led by our Town Clerk, Vicky Pryce.”

“That the Bailiffs of old wore robes must be an acknowledged fact”, as Mr Bird wrote in 1912, and he stated that Richard Miles wore a type of robe when he was in office in 1827 at the time the original Chinese Bridge was built. The robe was made out of some heavy black material such as bombazine or camlet, and a trimmed black plush around the collar and sides. There was no Mayor’s robe until Mr Charles Veasey was Mayor in 1883, he presented the first Mayors robe to the Council. The colour of this robe was blue trimmed with fur, but still there was no chain of office to be worn. It entered into the minds of some that an ancient Town like Godmanchester should possess a Mayoral chain, and that it would be a befitting manner to commemorate the Queen’s Jubilee. Mr E Tillard was the Mayor in 1896/97 and the affair was put into motion. An appeal was made to those who had passed the chair of office and to the members of the families who their ancestors had officially been connected to the old Borough, and the result was most satisfactory. An order was made for the chain to be made by a London company and it was completed in June 1897.

Please read the latest message below and catch up on previous ones too: